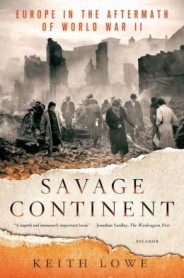 I think one of the coolest yet sadly underutilized thing in the book blogger world is the Library Loot meme. Time and time again I’ve learned about new books thanks to bloggers who’ve simply taken the time to tell the world what they picked up at the library that week. One such blogger is Claire of The Captive Reader. Last January in one of her Library Loot posts she mentioned a new book by Keith Lowe entitled Savage Continent: Europe in the Aftermath of World War II. Just the title along was enough to make me read it. Then, later that summer after hearing the author interviewed on NPR’s Fresh Air, I knew right then and there I needed to read Lowe’s book. So you can only imagine my joy when I spotted a copy at my public library. After grabbing it and taking it home, I pushed aside whatever books I had been reading and dived straight into Savage Continent. After finishing it last week or so I can tell you without a doubt I have no regrets. Savage Continent is a superb book.

According to Lowe, most Europe at the end of WWII resembled a post-apocalyptic wasteland. With over 30 million dead, countless major cities reduced to rubble and entire communities wiped off the face of the earth, the same mighty continent that gave the world the Enlightenment, the Industrial Revolution and some of the greatest achievements of the modern age was in ruins. To give today’s readers a sense of context, here’s how Lowe begins his book:

Imagine a world without institutions. No governments. No school or universities. No access to any information. No banks. Money no longer has any worth. There are no shops, because no one has anything to sell. Law and order are virtually non-existent because there is no police force and no judiciary. Men with weapons roam the streets taking what they want. Women of all classes and ages prostitute themselves for food and protection.

But wait, there’s more. State-sponsored ethnic cleansing spawns some of the largest forced migrations in history. Revenge killings stalk the land. Elsewhere in Europe civil wars erupt as groups on the political left and right fight over who will rule in the post-war world. Borders are being redrawn. Millions, many of them Holocaust survivors and former slave laborers, languish in displaced persons camps. Throughout Eastern and Central Europe unpopular Communist regimes are being imposed by the Soviet Union. Poles are killing Ukrainians, Ukrainians are killing Poles and everyone is killing Germans. The French, Italians, Yugoslavs and Greeks are killing each other. Partisans in Lithuania and Ukraine are waging guerilla warfare against Red Army troops. With close to 90 per cent of Europe’s Jews dead those remaining are leaving Europe for America, Britain and Palestine. Confronted with this grim reality world leaders fear with good reason that Europe will never recover.

This is a fantastic book. After reading Savage Continent not only does one get a detailed look at the depth and scope of the devastation, one learns that after Germany’s surrender, the misery and killings did not end. Ethnic and political conflicts that raged during and immediately after the Second World War in France, Italy and Greece would shape those nations’ political trajectories for years to come. The worst would be Yugoslavia, where after 50 years of relative peace the nation would erupt with its own nightmare of bloody ethnic warfare.

Savage Continent also makes a great follow-up read to books like Anne Applebaum’s Iron Curtain: The Crushing of Eastern Europe 1944-1956, Catherine Merridale’s Ivan’s War: Life and Death in The Red Army 1939-1945 and Agate Nesaule’s A Woman in Amber: Healing the Trauma of War and Exile. In conclusion, as I said at the beginning this is a superb book. Highly recommended.

30 thoughts on “Savage Continent: Europe in the Aftermath of World War II by Keith Lowe”