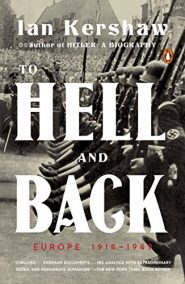 As part of an ongoing research project I’ve been reading books on European history, especially that of 20th century. Back in September I read Mark Mazower’s Dark Continent: Europe’s Twentieth Century and recently I borrowed through Overdrive Ian Kershaw’s To Hell and Back: Europe 1914-1949.  In 2019 I read its sequel The Global Age: Europe 1950-2017 and was duly impressed. I’m happy to report Kershaw did not disappoint me.

Like some cataclysmic three act play, the first half of the 20th century brought to the European continent World War I, the Depression and World War II. 50 years later Europe emerged from this bloody third act impoverished and broken. While Nazism and Italian Fascism had been vanquished, the exhausted Continent was left almost equally divided between East and West, and would remain so for another half century.

In To Hell and Back Kershaw addresses in detail everything I’d hoped: the run-up to World War I and its significant battles; the Paris Peace Conference and the new European order it spawned, including the punitive reparations imposed upon the young Weiner Republic of Germany; the rise of new forms of revolutionary totalitarianism in the USSR, Italy and Germany as well as a concomitant slide from democracy to conservative authoritarianism throughout much of Europe with the exception of Great Britain, France, the Low Countries and Scandinavia (in addition to other outliers Czechoslovakia and Eire); the Depression: and the Second World War’s origins, horrors and aftermath. He also discusses the period’s significant social, economic, technological and artistic developments.

Perhaps my most memorable take away from Kershaw’s book are the of destabilizing effects of ethnic tensions in Central and Eastern Europe. Restive nationalities yearning for independence or union with their neighbors, and long-oppressed ethnic groups perceived to be standing the way of national homogeneity would help spark not one but two world wars during the first half of the 20th century.

Meant as a blow against Austro-Hungarian rule over the region’s southern Slavs, in 1914 a Serb nationalist assassinated the Austrian Archduke and his wife. Backed with a blank check by its increasingly bellicose ally Germany, Austria-Hungary invaded Serbia to punish and reassert dominate over its southern neighbors (and given the dual empire’s own multi-ethic composition, reassert dominance domestically as well). Russia, in turn would come to the aid of its junior ally Serbia and respond with force. Germany, coming to defense of Austria-Hungary would declare war on Russia also hoping to carve off a slice of its neighbor’s territory. Thus began the First World War.

By the 1930s the Nazis, a party that elevated race above state, would take control of a divided and dysfunctional Germany. Chief among the demands of Hitler and his cronies was the incorporation of neighboring ethnic Germans into the Reich. After annexing Austria he demanded, and was awarded the Sudetenland, home to a sizable German population. But after the German army occupied the rest of Czechoslovakia Great Britain and France learned they’d reached the limits of appeasement. Once Hitler began calling for the Polish Corridor and Danzig (technically a “free city” under League of Nations protection, overwhelming ethnic German but closely administered by  Poland) war looked likely. In 1939 when Germany signed a non-aggression pact with the USSR to secure its Eastern flank war was inevitable. Poland was invaded from both West and East. Just like 20 years earlier, military aggression in Eastern Europe would spark a continent-wide conflict with devastating consequences.

This makes superb follow-up reading to other faves of mine, especially MacMillan’s Paris 1919: Six Months That Changed the World , Robert Gerwarth’s The Vanquished: Why the First World War Failed to End, Ross Range’s 1924: The Year That Made Hitler and Keith Lowe’s Savage Continent: Europe in the Aftermath of World War II.

Speaking of follow-up books, I’m hoping To Hell and Back will inspire me to read both Keith Lowe’s The Fear and the Freedom: How the Second World War Changed Us and Tony Judt’s tour de force Postwar: A History of Europe Since 1945.

Please consider To Hell and Back highly recommended.

5 thoughts on “About Time I Read It: To Hell and Back by Ian Kershaw”