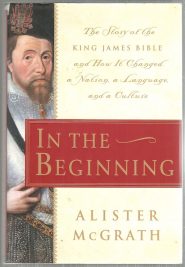 In the early 2000s three books were published, all within a year or two of each other dealing with the creation of the King James Bible. The first one of these I read, Benson Bobrick’s  Wide As the Waters: The Story of the English Bible and the Revolution It Inspired, I secured from my public library a month or two after it was published. It would take me almost two decades to get around to reading the second one, Adam Nicolson’s God’s Secretaries: The Making of the King James Bible after a copy sat ignored in my personal library for years. The third book, Alister McGrath’s In the Beginning: The Story of the King James Bible and How it Changed a Nation, a Language, and a Culture I attempted to read right after it was published but only got 30-40 pages read before I had to return it to the library.  As interested as I’ve always been in this subject matter I never took another crack at In the Beginning. (Although in 2007 I did read The Dawkins Delusion?: Atheist Fundamentalism and the Denial of the Divine, a book he co-authored with his wife Joanna Collicutt McGrath.)

After relocating from the big city to my current rural surroundings two years ago I noticed one of the three public library serving my county does in fact have a copy of In the Beginning. Out of the blue a few weeks ago I decided to borrow it and finally give it another shot.

For good, bad or otherwise McGrath doesn’t begin talking about the teams of learned English scholars and ecclesiastics gathered together to translate the Bible from ancient Hebrew, Greek and smatterings of Aramaic until the last third of the book. Before that, in the first two-thirds of In the Beginning he discusses the pertinent historical developments leading up to arguably history’s most unrivaled translation project. Starting with the Renaissance, he proceeds to the Reformation (both of which resulted in a greater sense of personhood, increased literacy, expanded availability of printed material and renewed appreciation of ancient texts and languages of antiquity), followed by England’s evolution from a middling kingdom on the European periphery to a rising power to be reckoned with, and ending with his thoughts on the English language. According to McGrath, after five centuries of taking a back seat to Classical Latin and Norman-imposed French English was at last coming into its own. No longer the crude patois of serfs and peasants, it had evolved into a sophisticated language capable of expressing greatness, nuance and beauty, and therefore worthy enough for the works of Shakespeare and the Holy Scriptures.

The King James Bible was intended to replace earlier English language Bibles, chief of which was as the Geneva Bible, which had achieved considerable popularity, especially among the country’s Puritans. But regardless of its popularity, the Geneva Bible was detested by England’s King James because he felt threatened by the anti monarchial tone of its margin notes. With all the translators of the King James Bible hailing from Oxford, Cambridge, London and environs, the final product would reflect the English spoken in Southeast England, as opposed to other regions of the realm. (In addition, according to McGrath after examining written records from this era historians have concluded the English people were starting to move away from the style and vocabulary of English utilized in the King James Bible.) Lastly, since those same luminaries were schooled in the Classical Greek of Homer, Aristotle and Herodotus they interpreted the New Testament’s country cousin-quality Koine Greek as loftier than it was. (On the other hand, those tasked with translating what Christians refer to as the Old Testament left many of its Hebrew idioms intact. As a result phrases like “rise and shine”, “under the sun”, “fly in the ointment” and “by the skin of my teeth” entered the English language. ) Like any work of art, be it visual, musical or literary, the King James Bible is very much a product of its time and place.

With McGrath’s In the Beginning finally under my belt, I’d like to tackle a few other books I’d consider to be in a similar vein. Brian Moynahan’s God’s Bestseller: William Tyndale, Thomas More, and the Writing of the English Bible—A Story of Martyrdom and Betrayal has been on my to be read list forever and should make a great follow-up to In the Beginning. This would also be a good time to read Alix Christie’s novel Gutenberg’s Apprentice since I’ve owned a copy for close to five years and never once touched it. Come to think of it, I should also finally read my copy of Nicholas Ostler’s Ad Infinitum: A Biography of Latin. Hopefully, in the not too distant future you’ll read about all three of these books on this blog.

3 thoughts on “Books About Books: In the Beginning by Alister McGrath”