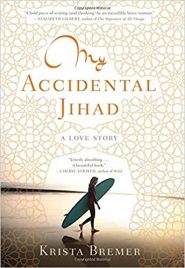 I’m a sucker for a good memoir. In addition to highly publicized ones like Educated and Hillbilly Elegy, over the years I’ve also stumbled across a number of lesser known ones that might not have received tons of press, but nevertheless were outstanding like Fleeing Fundamentalism, Undocumented and A Time to Betray, ones that made my year-end list of Favorite Nonfiction. More often then not I discovered them, as well as other decent yet off the radar memoirs simply but spotting them on the shelf at the public library. One I stumbled across six or seven years ago was Krista Bremer’s My Accidental Jihad: A Love Story. One of many books I borrowed, read several pages only to get distracted by something else before returning it to the library essentially unread. But last week at the public library I once again spied a copy of Bremer’s memoir and feeling I needed to take a break from Ramachandra Guha’s consuming yet out of this world 950 plus page India After Gandhi I once again borrowed a copy of My Accidental Jihad. This time, I’m happy to report I whipped though it in no time.

Not long after graduating from college Bremer wanted more out of life. Her job at Planned Parenthood paid the bills, but that was all. Living near the Pacific Ocean in sunny California made for great surfing but sucked her ambition. Advised by her father “[I]f you want to do anything with your life you’ll need to move away from the ocean” she moved cross county to pursue a master’s degree in journalism at the University of North Carolina at Chapel Hill. Finding herself inland, far from the ocean and thus unable to surf she took to running along the area’s woodland trials, where she began crossing paths with another runner, an older, darker man of unknown ethnicity. After a chance encounter with him one weekend at a local farmers’ market she accepted his invitation to run together. Next morning she met Ismail, an expat from Libya, at the trailhead, and the two of them embarked on their run. Eventually their outing led to a romantic relationship, and Bremer pregnant. Unsure how to proceed, she’s was taken aback when Ismail proposed marriage, since marrying a man who’s older, foreign and poorer than her wasn’t exactly her original plan. Nevertheless it felt like the right thing and she accepted. After a quick trip to the appropriate civil authorities to process the requisite paperwork they were married.

But like any marriage, not only do gain a spouse, but you also inherit a family. With Ismail having close to 10 brothers and sisters (not counting the several who didn’t survive to adulthood) back in Libya Bremer knows she’s in for a challenge when she agrees to fly halfway across the globe to visit her husband’s family. Despite being an oil-exporting member of OPEC, the Libya Bremer encounters comes off as a poor and broken land. Roads, even if paved are cratered by massive potholes. Garbage piles abound, open sewers run freely and even the most modest modern medical care amenities seem nonexistent. Compounding all this misery the country’s government, a regime as corrupt as it autocratic, solely dictated by the whims of its eccentric, homicidal despot. In a place largely untouched by Western concepts of gender equality while visiting with family members Bremer is routinely shunted off to the side with the rest of the women, segregated and unable to communicate due to her inability to speak Arabic. Needless to say in the end she’s happy when the time comes to leave Libya.

Two decades ago, just prior to the terrorist attacks of 9/11 I attended a lecture by a visiting Islamic scholar at my local university. Even then the term jihad was perceived by many Americans in a negative light, frequently equated with barbaric holy wars, suicide bombings and other religiously motivated acts of violence. Our esteemed speaker that night earnestly reassured us in its original context jihad mean “struggle” and by that a personal one in which an individual strives to be decent and righteous. Raised in a nominal Christian home and later, as an adult Bremer adopted elements of Buddhist thought. After observing the sacrifices her husband made during his annual observance of Ramadan eventually led to her “own accidental jihad” “forcing me to wrestling with my own intolerance and self-absorption.” While always supportive of her husband’s religious faith and practice over the years help she began embracing an Islamic-inspired outlook on life in hopes it would provide her with purpose and meaning. However, at the same time I’m hesitant to call her a convert. (It’s interesting to note soon after her memoir was published it was republished under the potentially less polarizing title A Tender Struggle: Story of a Marriage).

After having good success with My Accidental Jihad I’m now in the mood for a yet another lesser known, but still quality memoir. Perhaps if I’m lucky I can stumble across another at my next visit to the public library.

10 thoughts on “About Time I Read It: My Accidental Jihad by Krista Bremer”