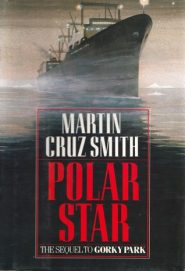 The day at the public library I picked up Martin Cruz Smith’s Wolves Eat Dogs I also grabbed his 1989 thriller Polar Star. Published decades ago, I can still remember when  it was released to much fanfare and touted as a sequel to Cruz Smith’s mammoth best seller Gorky Park.

Instead of set in Moscow and environs like its predecessor, Polar Star takes place in the Bearing Sea mostly aboard a giant factory ship. As part of an inaugural joint venture between the USSR and the United States a small fleet of American-owned fishing boats pass their fish-laden nets up to the Polar Star to be processed, frozen, stored and later sold with the two parties sharing the profits. With the USSR deep into glasnost and perestroika expectations are running high both teams can work together for the greater good.

Deep inside the bowels of the huge factory ship is former Moscow Militia Inspector Arkady Renko, knee deep in fish guts slaving away on the production line. When one of the Soviet crew is found dead, Renko is quietly pressed into service to determine how she died, and to do so as quickly and discreetly as possible lest her untimely demise derail the fragile commercial alliance. His task is daunting one, made even more difficult by those who would rather call it a suicide and cover things up. Before long he learns just about everyone onboard the small flotilla is shady, secretive and potentially criminal. Think of it as Murder on the Orient Express meets The Deadliest Catch.

Polar Star, while an older thriller still packs a punch. (Although thanks to its age it now reads like historical fiction.) I enjoyed it even more than Cruz Smith’s more recent Wolves Eat Dogs. After enjoying Polar Star I now wanna read the entire Arkady Renko series.