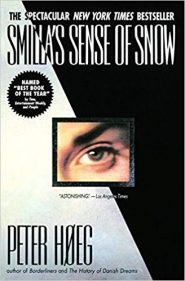 I’ve yet to jump on the Nordic noir/Scandinavian crime bandwagon, but after reading the grandaddy of them all, Peter Høeg’s 90s whodunnit Smilla’s Sense of Snow maybe it’s finally time. In search of something for Rose City Reader’s European Reading Challenge, not to mention just a fun piece of fiction, I borrowed a copy through Overdrive and gave it a try. Before long I was sucked in and couldn’t put it down.

On the surface, things look simple. One night in Copenhagen a young Greenlandic boy is found dead after falling off the roof of an apartment building. The responding police deem it an accident but one of the late boy’s neighbors, Smilla, a 30-something loner of mixed Danish-Greenlander heritage thinks otherwise. Based on her extensive knowledge of snow, stemming from not just her early childhood in Greenland but also her time as a snow and ice scientist, suspects foul play. (Smilla also knows he was deathly afraid of heights and thinks it’s odd he’d be on the roof in the first place.) Her quest to know the truth will take her from the corridors of Denmark’s wealth and power to her ice-covered childhood home in Greenland.

Smilla is a great character. Intelligent, misanthropic, dogged and not afraid to throw a punch or two if needed she reminds me a lot of Krysten Ritter’s Jessica Jones character from the Netflix series of the same name. Fitting for such a broken individual, your knowledge of the character is slowly revealed bit by bit over the course of the novel.

This novel is dark, seasoned with memorable characters, complex (to quote the Dude from The Big Lebowski “there’s so many levels, man” ) and pulls you along like a freight train to the bitter end. It’s easily one of the best novels I’ve read this year.

8 thoughts on “20 Books of Summer: Smilla’s Sense of Snow by Peter Høeg”