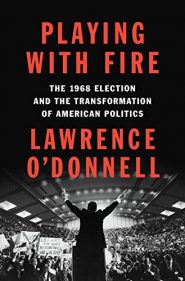 It always takes me forever to write about outstanding books, probably because I feel my modest reviews can’t do these books justice. So, instead of just sitting down and trying to crank out an honest review I wind up procrastinating. In the end I usually wind up doing a rush job that leaves me feeling I’ve come up short. Well, with that in mind here’s another rush job!

When I spotted a copy of Lawrence O’Donnell’s 2017 book Playing with Fire: The 1968 Election and the Transformation of American Politics in the “New Books” section at the public library eagerly I swiped it, not just because I’ve read time and time again just how a pivotal year in history 1968 was, but I vaguely remembered Playing with Fire had been favorably reviewed, although honestly I was unable to remember any details. Once I started reading it I found Playing with Fire impossible to put down, easily making it one of the best books I’ve read all year.

To risk being cliché, 1968 was a year like no other. To risk invoking another cliché, Tip O’Neill’s famous quote “all politics is local” felt meaningless as the increasingly unpopular Vietnam War dominated the political landscape. Only four years after his landslide electoral victory over Goldwater, President Johnson, the incumbent, stumbled out of the gate by barely beating his in-party rival Eugene McCarthy 50 to 42 percent in the New Hampshire primary. Supported by an army of young anti-war young activists (among them not only Hilary Clinton but an earnest press secretary by the name of  Seymour Hersh) McCarthy’s campaign turned the kick-off primary into a referendum on Vietnam. Johnson and his team, so overconfident they didn’t even place his name on the ballot until the last-minute were shocked by his unexpectedly poor showing. Before anyone knew it, Johnson would tell the nation he would not run for reelection, thus turning the race of the presidency on its head.

It’s hard to imagine in this day and age but in 1968 roughly only half the states held primaries. Instead, in reality nominees were chosen at party conventions by political bosses and power brokers. The primaries, while relatively important, mostly served to gauge voter popularity and political momentum. Robert F. Kennedy, emboldened by Johnson’s stumble could jump in during the middle of the presidential race and still be considered a viable candidate, just needing to win over the party bosses at the convention. After RFK’s  assassination the night he won the California primary the Democratic Party’s old guard ultimately selected Johnson’s Vice President Hubert Humphrey, a candidate who hadn’t participated in a single primary.

In 1968 O’Donnell argues this election would change forever how America chooses it presidents. Tired of the fears an unaccountable “smoke-filled room” picked party nominees and not America’s rank and file after 1968 all states would go on to hold deciding primaries and caucuses. (Adding to America’s collective disgust was the shock of seeing televised images of rioting in the streets of Chicago as the city hosted the Democratic Convention.) Long before he ran Fox News, a 26-year-old Roger Ailes would help transform Richard Nixon into a media savvy candidate and law-and order champion of Middle America. Lastly, a Republican Party outsider by the name of Ronald Reagan made a brief run for the presidency using the campaign slogan “Mark America Great Again.”

Playing with Fire is an outstanding book and easily makes my year-end Best Nonfiction List. Please consider it highly recommended.

2 thoughts on “Playing with Fire by Lawrence O’Donnell”