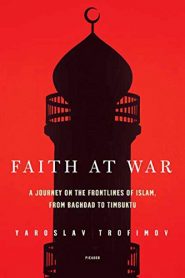 Even though it’s been a decade since I read it I still find myself recommending Yaroslav Trofimov’s outstanding 2007 book Siege of Mecca: The Forgotten Uprising in Islam’s Holiest Shrine. Whenever someone asks me for a reading list of books about the Middle East I always include it along with other favorites like Kai Bird’s Crossing Mandelbaum Gate, Neil MacFarquhar’s The Media Relations Department of Hizbollah Wishes You a Happy Birthday and Thomas Friedman’s From Beirut to Jerusalem. Last Saturday, during one of my weekend visits to the public library I came across a copy of Trofimov’s first book Faith at War: A Journey on the Frontlines of Islam, from Baghdad to Timbuktu. Knowing full well I had  a sizable stack of library books next to my bed waiting to be read I still grabbed Faith at War, hoping I’d enjoy it as much as I did Siege of Mecca. Well, after happily burning through it in no time I’m happy to say Trofimov did not disappoint me.

Published in 2005, Faith at War is a collection of pieces recalling Trofimov’s travels across the Muslim world during the years immediately following 9-11. In his quest to better understand the challenges facing the world’s Muslims and with it the rage some have directed towards the West he interviewed clerics, government officials, dissidents and Islamic fighters. Trofimov traversed three continents, reporting from a host of countries stretching from Saudi Arabia to Mali to Bosnia. During the US-led invasion of Iraq he sped across the border from Kuwait in a rented SUV and then returned two years later to observe life under US occupation. In Afghanistan he spent time embedded with American Marines as they did patrols of remote villages searching for Taliban fighters, their allies and weapons. Lastly, Trofimov show us the surprising success story of Mali, a poor North African country at the time of Trofimov’s visit had embraced a home-grown vibrant democracy, perhaps in some ways made easier thanks to the laissez-faire interpretation of Islam practiced by most Malians. (Sadly, in 2012 this later day Belle Époque would come to an end, at least temporarily when the country was briefly overrun by Islamic fighters.)

Despite being published a decade ago, Faith at War holds up well. Yes, it’s a pre-Arab Spring and pre-ISIS world Trofimov writes about but his insights provide valuable backstory to what’s going on right now not just in the Middle East but also the wider Islamic world.