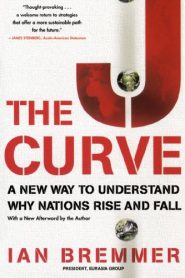 Back in 2010 while channel surfing I happened to land on PBS in the middle of Charlie Rose interviewing a geopolitical thinker/writer named Ian Bremmer. Bremmer had just written a book called The End of the Free Market: Who Wins the War Between States and Corporations ? and the two of them discussed recent global economic developments and China’s rise as an international power. As I sat watching the interview I found myself intrigued by Bremmer’s insights and vowed to read his recently published book. Later that year I did. But sadly, as much as I valued Bremmer’s take on the state of the world I never got around to reading more of his stuff.

Fast forward to this past summer, I happened to stumble across Bremmer’s Facebook page and Twitter feed. Watching his posted videos and reading his tweets rekindled my appreciation of him. (He’s also probably the only international mover and shaker with a muppet created in his own likeness.) So much so when I discovered my public library had an available copy of his book The J Curve: A New Way to Understand Why Nations Rise and Fall I snatched it up. Unfortunately, it took me a bit longer than it should had for me to make it through his book because I kept getting distracted by other books I was reading at the time. Eventually, I  made my way through it. Overall, I enjoyed it even though I did have one minor problem with it.

That problem, which believe me isn’t a fault of Bremmer’s. The J Curve was published in 2006, making it a decade old. Therefore, the whole time I was reading the J Curve I kept asking myself how relevant his book could be. After all, much has changed since 2006. We’ve seen both the Arab Spring and the coming of ISIS. Dictators like Venezuela’s Hugo Chavez, Cuba’s Fidel Castro and North Korea’s Kim Jong-il have all passed away. (Chavez and Castro’s deaths could lead to greater openness in their respective countries. On the other hand, it looks like Kim Jong-il’s death has led to even more oppression and insanity.) Lastly, in recent years we’ve experienced a global rise in old school nationalism with the passing of Brexit and the election of Donald Trump. But in spite of all this, happily, I can say yes, The J Curve is still relevant to today’s world.

The J Curve – Stability versus Openness

Bremmer addresses that age-old question we, especially those involved in the fields of international politics and diplomacy have been asking for years: how does an authoritarian regime liberalize without becoming so unstable it descends into chaos resulting in political fragmentation or worse, yet another authoritarian regime. According to Bremmer, it’s no easy challenge. (Throughout the book he refers to this relationship between political stability and openness as something that can be plotted on a graph, hence the term “J Curve.”)  Over the years, Western nations like the United States has preferred to isolate authoritarian regimes like Iran, Cuba and North Korea with sanctions and censure in hopes of promoting regime change. In Bremmer’s opinion such measures end up being counter productive because the more isolated and impoverished the citizens are in these countries become, the easier it is for those running these regimes to manipulate the masses and thus stay in power. In The J Curve Bremmer looks at different authoritarian countries which succesful liberalized like South Africa, imploded like Yugoslavia and Iraq, and liberalized, imploded and then returned to authoritarianism like the Soviet Union/Russia.

My only knock on this book, really in reality is an unfair one in that it’s 10 years old. But like I said earlier, for a book a book that was published a decade ago it still feels relevant. The portions discussing challenges facing Saudi Arabia, Israel, and especially China look spot on even 10 years after he wrote them. Perhaps because of it’s relevancy after reading the J Curve I’m now inspired to read more of Bremmer’s stuff. So with that in mind, don’t be surprised if you see more of his stuff like Superpower: Three Choices for America’s Role in the World and Every Nation for Itself: What Happens When No One Leads the World reviewed on my blog.

2 thoughts on “About Time I Read It: The J Curve by Ian Bremmer”