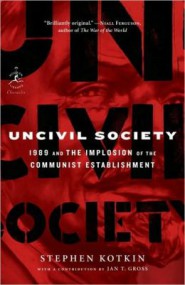 Ever go in search of particular book and instead end up buying something else? I once went to a bookstore to buy a copy of Hans Zinnser’s 1934 classic Rats, Lice and History and came home with William McNeill’s just as classic Plagues and Peoples. (Since McNeill’s book went on to be one of my favorites of all time I never doubted once I chose the right book). Recently, my book club chose Colin Renfrew’s Prehistory: The Making of the Human Mind as our monthly selection. I was all set to read it but after reading the book’s reviews and reader comments on Amazon I was less than excited. What did excite me was the available selection of Kindle format Modern Library Chronicles for only $2.99. While they all looked like great deals one particular title caught my eye. Uncivil Society: 1989 and the Implosion of the Communist Establishment by Stephen Kotkin looked quite promising. So for less than the price of a pint of good beer, I bought it. And just like years ago when I choose Plagues and Peoples over Rats, Lice and History I have no regrets.

Published in 2009, Uncivil Society is part of the Modern Library Chronicles. It’s a series of compact but nevertheless informative books, probably crafted for introductory and/or supplementary purposes. Over the years I’ve read at two least books from series, namely Karen Armstrong’s Islam: A Short History and Milton Viorst’s Storm from the East: The Struggle Between the Arab World and the Christian West. Both were decent and left me wanting to read others from the series.

In Uncivil Society, Kotkin (with help from Jan Gross) tries to explain not just why the Communist nations of Eastern Europe collapsed, but why it happened so quickly. (Kotkin uses the term “bank run” to describe this rapid implosion.) By looking at the last few decades leading up to the fall of Communism in Poland, East Germany and Romania, according to Kotkin several factors caused the demise of the old Eastern Block. One was those countries’ inability to economically compete the not only with the capitalist nations of Europe and North America, but also the upstart Asian economies of South Korea and Taiwan. Unable to provide their citizens with consumer goods without borrowing money from the West, they soon found themselves drowning in debt with nothing valuable to export. As things started to spiral out of control Gorbachev refused to prop-up the failing regimes. By then it was over for the Communist regimes of Eastern Europe.

Since I’ve had pretty good luck with three different books from the Modern Library Chronicles, I wouldn’t mind exploring a few others. Michael Sturmer’s The German Empire: A Short History, Tim Blanning’s The Romantic Revolution: A History, Richard Bessel’s Nazism and War and Robert S. Wistrich’s Hitler and the Holocaust all look promising. All economically priced and easily available through Amazon, I have a feeling I’ll be reading more from the Modern Library Chronicles.

5 thoughts on “Uncivil Society: 1989 and the Implosion of the Communist Establishment”