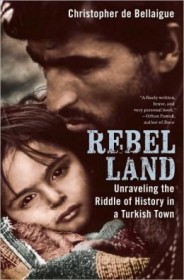 I discovered British journalist Christopher de Bellaigue four or five years ago when I came across his book The Struggle for Iran. A few years later I followed it up with his 2007 offering In the Rose Garden of the Martyrs. While I found his dense writing style not exactly conducive for breezy reading, his detailed and intelligent descriptions of life in Iran has few equals, especially among Western journalists. While prowling the shelves at the public library from time to time I noticed his 2010 book Rebel Land: Unraveling the Riddle of History in a Turkish Town. To me it’s always been one of those books I’ve toyed with checking out, but never did. But recently, after my old interest in all things Turkish inexplicably became rekindled, at long last I swiped De Bellaigue’s book from its old familiar spot on the library shelf. Later, as I read Rebel Land in the comfort of my home, neighborhood coffee shop or public bus, (slumped over and semi-comatose after a long work day) I was once again taken into the world of De Bellaigue. This time, instead of writing about the diverse, almost contradictory nation of Iran, De Bellaigue set his journalistic sights on Turkey. Specifically, the subject is Varto, a backwater village geographically (and perhaps culturally) closer to the Middle Eastern nations of Syria, Iran and Iraq as opposed to the nation’s political capital Ankara (and worlds away from Turkey’s commercial and cultural capital Istanbul). Varto might be some poor, far-flung provincial town. However, when it comes to history, it’s rich.

Reading Rebel Land is like doing an archeological dig in reverse, in which the first layers you uncover are the oldest. The book begins with assorted accounts of Ottoman strong men and local legends, with all of this taking part within the larger context of an uneasy coexistence between Turks, (both Sunni and Alevi) Kurds, (again, both Sunni and Alevi) and Armenian Christians. After the Armenian Genocide of the early 20th century and the fall of the Ottoman Empire, Varto was pulled into the orbit of the modern Turkish Republic. By the late 60s political instability, civil unrest and intermittent military rule would plague Turkey.  Meanwhile, a Kurdish insurgency would begin stalking the land, leaving its mark on Varto and the rest of the nation.

It’s impossible to finish one of De Bellaigue’s books and not feel like you’ve learned something. Maybe because he’s written for publications like The Economist, The New York Review of Books and the Financial Times, I’ve found his books smart and sophisticated. Rebel Land is no exception. It’s not light reading, but that doesn’t matter. It’s intelligent.

In the coming months I’m hoping to feature other books with a Turkish theme. Fortunately for me my public library has an ample selection of fiction and nonfiction that should serve nicely for this purpose. With Rebel Land fresh in my mind, I can’t wait to dive in.