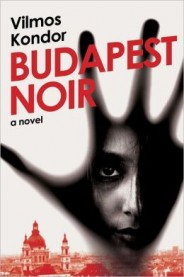 One of things I like about reading challenges is their ability to inspire me to read books from outside my usual reading diet. I tend to read mostly nonfiction and with that, mostly books dealing with history, comparative religion, and international relations. Rose City Reader’s European Reading Challenge encourages me to read books about or set in Europe while Mysteries in Paradise’s Global Reading Challenge inspires me to read international fiction and the Introverted Jenn’s Books in Translation Reading Challenge makes me wanna read books translated from other languages. So, with challenges like these helping shape my reading choices, it seems natural I would grab a copy of  Vilmos Kondor’s novel Budapest Noir when I stumbled upon it during a recent library visit.

Set in Hungary’s capital city in 1936, Budapest Noir tells the story of crime reporter Zsigmond Gordon’s investigation into the mysterious death of a beautiful young woman. In addition to the unsolved murder, Kondor’s whodunit has all the ingredients would expect in an entertaining crime noir novel: prostitution, political intrigue, pornographers, washed-up boxers, crooked cops and the secretive world of the rich and powerful. And if things couldn’t get any more twisted, all of this transpires in Hungary, and like the other nations of Central and Eastern Europe it’s unluckily wedged between Fascist Italy and Nazi Germany on one side and the Soviet Union on the other. As civil war rages in Spain and Italy fights to subdue Ethiopia, Europe slowly begins to move toward another Great War.

I wasn’t expecting to like Budapest Noir very much but much to my surprise I did. While composed of classic noir elements, nothing about Kondor’s felt cliché. I also found it fast-paced and entertaining. (Even more impressive when you take into account its Kondor’s first novel.) Kudos too to the translator for doing a great job translating the novel from Hungarian into English.

While I consider myself mainly a nonfiction reader, it’s good to mix it up a bit with a little fiction. With the three previously mentioned challenges leading me down the path that led me to Budapest Noir, maybe before it’s all said and done there will be other pieces of enjoyable crime fiction featured on this blog. I certainly hope so.