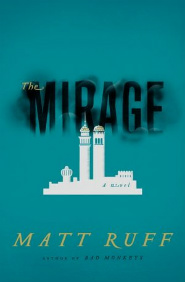 Imagine a world where the Middle East is home to the global superpower known as the United Arab States. The state of Israel with its capital of Berlin resides in Europe after victorious Arab armies carved it out of the ruins of a defeated Nazi Germany after the last world war. England is ruled by a crazed Anglican despot hell-bent on acquiring nuclear weapons in order to wipe Israel off the map. North America is home to a number of backward and theocratic dictatorships like the Christian States of America and the Evangelical Republic of Texas. Osama bin Laden is not only a powerful senator from Arabia, but also the behind the scenes leader of a shadowy anti-terrorist organization called al-Qaeda. As criminal overlord and head of the Baath Labor Party, Saddam Hussein conducts himself as a cross between Al Capone and Jimmy Hoffa. And just when things couldn’t look more surreal, on 11/09/01 a team of fundamentalist Christians hijack four jet liners and crash two of them into Baghdad’s Twin Towers, causing the United Arab States to unleash its War on Terror, culminating with not one, but two invasions of Christian North America.

This is the bizarro world concocted by Matt Ruff for his incredibly clever, fast-paced and surprisingly funny 2012 novel The Mirage. Ever since I read Anne Saker’s review in my local newspaper The Oregonian, I’ve wanted to read Ruff’s novel. Well, as luck would have it, after popping into the library one evening after work what would I find sitting on the shelf but a copy of The Mirage. I grabbed it without hesitation, checked it out and headed out the door. From there I ripped through it in a weekend. After finishing it, I’m happy to report that it exceeded my expectations.

There’s much to like about The Mirage. The storytelling is tight and fast-paced. While its core characters might not be as rich and complex as one would expect to find in a piece of high-art literature, I still found them adequately fleshed out and defined well enough to add depth and substance to the story. In addition, Ruff has done a great job crafting an entertaining piece of fiction by blending elements of fantasy, alternate history and political satire while employing a quick-paced storytelling style one usually finds in popular spy thrillers and crime novels.

Some readers and reviews have taken issue with a few things. For instance, no one is denying that Ruff is incredibly clever as shown by his ability to successfully create the book’s parallel universe. But when one takes into account the novel’s rather weak ending, one is left wondering if The Mirage‘s sum is really equal to its parts. Fortunately for me, I found myself more than satisfied with Ruff’s novel.

Just as L. Frank Baum used the Oz books to comment on the politics and economics of America’s Gilded Age and Lewis Carroll satirized 19th century England with Alice in Wonderland, I’m sensing that Ruff, by flipping our world upside down in The Mirage is trying to not only entertain us, but get us to see what things looks like when the shoe is on the other foot. Perhaps The Oregonian‘s Anne Saker said it best when she wrote, “the book doesn’t want to persuade anyone or to yank on any heartstrings. It simply holds up a moment in time that we think we all know and dares the reader to consider a different universe.”

7 thoughts on “The Mirage: A Novel by Matt Ruff”