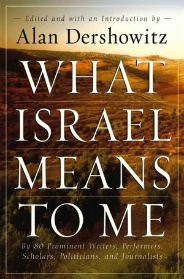 Honestly, I’m really not sure why I grabbed Alan Dershowitz’s 2006 book What Israel Means to Me: By 80 Prominent Writers, Performers, Scholars and Politicians and Journalists during one of my frequent library visits. With a huge stack of unread library books sitting by my bed the last thing I needed was one more book. But after reading Saul Bellow’s To Jerusalem and Back and Lesley Hazleton’s Jerusalem, Jerusalem perhaps I’ve developed a soft spot for books about Israel. Or maybe I just wanted another book for Helen’s Middle East Reading Challenge. Who knows. What I do know is by enlisting an incredibly eclectic group of 80 notables to share their views on the modern state of Israel Dershowitz has produced a surprisingly good anthology.

As the author of such books as The Case for Israel and The Case Against Israel’s Enemies and generally acknowledged as one of Israel’s most strongest supporter and apologists, one would think this book is nothing more than a collection of conservative and like-minded voices, mostly from the worlds of politics and academia. But fortunately it is not. Pieces from liberal/progressive individuals like Representative Barney Frank of Massachusetts, Jewish activist Michael Lerner and left-leaning Israeli politician Shalumit Aloni have been included, along with contributions from conservatives Pat Robertson and William Bennett. But when it comes to enlisting a multitude of diverse contributors, (both Jew and Gentile alike), Dershowitz should be commended for reaching out to accomplished individuals from across the vocational spectrum. Literary figures Erica Jong, David Mamet, Jonathan Kellerman and Mark Helprin are represented as well as pieces from entertainers and actors like Christina Applegate, Monty Hall and Natalie Portman. And the crazy thing is while of course some contributions are better than others, there isn’t a bad selection in the entire book. With many of the pieces autobiographical in nature, much of What Israel Means to Me is incredibly personal, offering a much-needed depth and nuance to the contentious debate over the Jewish state.

I have few complaints, if any, when it comes to Dershowitz’s book. While I can forgive him for not including something from an Israeli Arab or two, I’m surprised he didn’t include anything from Israelis Amoz Oz, David  Grossman and Natan Sharansky. But who cares. What Israel Means to Me far exceeded my expectations. Even with a big stack of unread library books by my bed, I’m very happy I took a chance and grabbed this book.

4 thoughts on “Alan Dershowitz gets 80 people to write about Israel.”