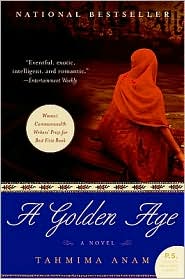 Last weekend I was in the mood for a little international fiction so during one of my frequent trips to the library I picked up a trio of novels written by authors from the Indian subcontinent. This particular one, A Golden Age by Bangladeshi author Tahmima Anam follows the adventures of Rehana Haque and those around her as they are caught up in the bloody chaos of Bangladesh’s 1971 War of Independence. Tahima, a former resident of pre-partition Calcutta and young widow of two college age children, stoically endures the hardships resulting from Pakistan’s brutal repression of the young nation’s struggle for independence. With her son a guerilla fighter and her daughter a political activist, Rehana struggles to protect the lives of her household and others as war, genocide, betrayal and privation haunt the land.

After finishing Anam’s novel this morning, I have mixed feeling about this book. Despite A Golden Age getting glowing reviews, I thought it was good, but not  exceptional. At times I thought the first-time novelist did a fine job portraying the sadness and terror experienced by everyday people thrust into extraordinary circumstances, but sometimes I found her storytelling a bit circuitous. Maybe it was just me, but I also thought her characters could have used a bit more development.

But I can’t be too critical of Anam’s novel since I burned through it in only a few days and let’s be honest, that doesn’t happen often with a debut novel. I’ve read that A Golden Age is the first book of a planned trilogy. If that’s the case, I’m cautiously optimistic Anam’s future novels will be well worth reading.

5 thoughts on “Fiction from the Indian subcontinent: A Golden Age”